This year, Hillel Russia celebrates its 25th anniversary. Founded in 1994 in Moscow, Hillel Russia operates in eight branches in the center of eight Russian cities. With the support of Genesis Philanthropy Group, JDC, Euro-Asian Jewish Congress and Russian philanthropists, Hillel Russia is not only providing young Jewish people with Jewish lifestyle but is also connecting them to the global Jewish community. It gives them an understanding that they have a rich background, even if they don’t know about it yet.

Unlike Hillels in North America, in Russia, Hillel is not affiliated with a university, but is a community-based organization that draws participants from all over the city. Hillel in Russia offers a warm and welcoming environment for every young Jewish person, regardless of their religious background, and makes a positive impact on the entire Russian Jewish community.

Hillel Russia runs several on-going activities on a regular basis. Programs are organized for Jewish holidays and Shabbat celebrations, leadership growth and volunteering. For each of these activities, special programs are held regularly in each city – up to seven projects a week. In total, Hillel Russia puts on more than 800 events per year. All these activities give Russian-speaking young Jews an opportunity to explore their Jewish traditions, history and culture, the history of their family and the “Jewish history” of their city and country. 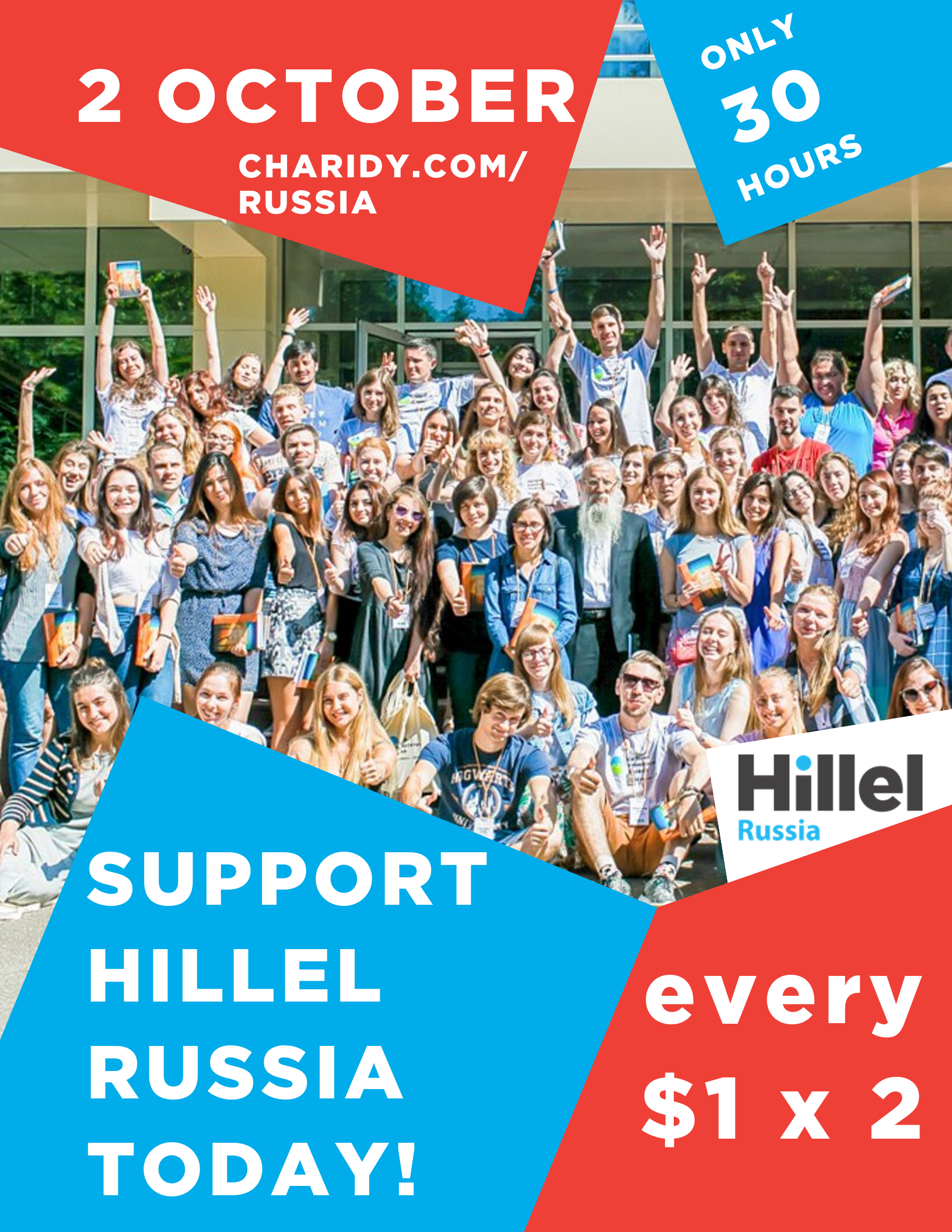 Only on the 2nd and the 3rd of October on the crowdfunding platform Charidy, leading up to Yom Kippur, the Day of Atonement, your donations will be generously doubled! We set a goal - to raise ,000, but there is only 30 hours to achieve it. If the goal is reached, all funds will go to support amazing Hillel work in 8 regions of Russia. If not, every dollar will be returned to donors. Our goal is to raise ,000 so that Hillel Russia’s 8 regional centres can remain open to students and continue to offer important programming.
https://www.charidy.com/russia

There is a unique phenomenon in Russia whereby parents do not teach children about their Jewish background, but children teach their parents. Hillel Russia holds family activities to make it easier for people to learn their family history. It gives parents an opportunity to become closer with their children, to share something meaningful and bond over an experience that they did not have 25 years ago.

Here are some of Hillel Russia’s outstanding activities:

Since 2016, every summer Hillel Russian holds Hebrew lessons in one of the most well-known places in Moscow – Muzeon Park. It’s an open-air museum of culture, home to 1,000 sculptures, summer movie theater and embankment. Every year Ilya Yuzefovitch, who is a graduate of the Department of Jewish Studies and Jewish Civilization of the Moscow State University, teaches Hebrew to everyone who feels it is important for him. About 900 people have completed the course, and 250 people participate in the course per summer. This tradition attracted the attention of the most fashionable Moscow mass-media such as The Village, Afisha Daily and Moscow 24 so that they found it important to publish information about the course.

For about 24 years the Jewish Film Festivals take place all over the world – from Hong Kong to Tucson. In 2015, for the first time, Russia joined the tradition and the Jewish Film Festival took place in Moscow. Ekaterinburg has participated since 2016. From the beginning The Ekaterinburg Jewish Film Festival attracts Jewish and non-Jewish locals. The most powerful films about Jewish culture, history, identity and contemporary issues were selected by the Arrangement Committee represented by Russian filmmakers and producers (Egor Odintsov, Konstantin Fam and others). In 2017, the ceremony was attended by Yevgeny Roizman, mayor of Ekaterinburg, and Vlad Lerner, the first secretary of the Embassy of Israel in Russia. Hillel activists from Ekaterinburg made a significant contribution to the festivals in 2017 and 2018: facilitated its promotion, invited experts to give lectures, organized activities for the guests and created a warm and friendly atmosphere. In addition to film screenings in the framework of the festival, Hillel has organized an educational program engaging the guests into special lectures, discussions and debates. The total number of people who attended screenings and educational events of the Festival exceeded 3,200.

Oy! Vey. Is this a Jewish culture festival?

That’s what people were exclaiming when they came to one of the biggest festivals in Saint-Petersburg which was organized by Hillel Russia. More than 1,200 visitors gathered to explore the Tel Aviv market on Vasilyevsky Island, eat kosher food and shop for clothes. Rabbis made jokes while giving Torah lectures. The Sevkabel Port accepted the first Jewish culture festival “Oy! Vey” in August 2018. It’s likely the holiday will become an annual tradition.

That’s what Nikita Rotin – young deaf man felt when was accepted to Birthright trip in January 2018. He was the first deaf Russian participant with a Sign Language translator to visit Israel on Taglit-Birthright Israel. Russian Sign Language is different from Israeli Sign Language and American Sign Language. How to send him on a 10-day trip to Israel? This was a new challenge for Hillel Russia professionals. To tackle that challenge, Hillel secured for Nikita a Russian Sign Language translator named Darya Mikhailova, making it possible for Nikita to explore Israel with others. “I wasn’t religious before and I’m not religious now, but I know I want Judaism and Israel to play a significant role in my life and my family’s life,” said Nikita upon returning from the trip.

Together, these stories reveal how Hillel Russia has created a free and warm environment for young people of any university, social or economic status to feel like they have a home away from home. In the past 25 years, Hillel Russia has become a trusted guide to Jewish life for thousands of students and young people and will continue to enrich the Russian Jewish community.